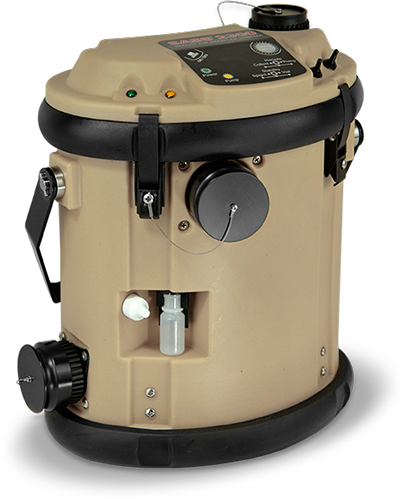 The SASS®2300 delivers all the performance you need in a portable aerosol particle collection system. Extremely long sampling protocols of up to several days are supported and sample fluid volume is maintained constant over the entire collection period, independent of ambient air temperature or relative humidity, providing unsurpassed monitoring capabilities in environments ranging from farmyards to hospitals to battlefields. Best of all, single or multiple units can be controlled wirelessly and users can download their own customized sampling protocols into the units.

The SASS 2300 Air Sampler extracts and transfers airborne pathogens, particulates, bacteria and spores from sampled air to small water volume for analysis. It employs a patented wetted-wall aerosol collection method that has received U.S. Department of Homeland Security Certification under the U.S. Safety Act of 2002.

It has been successfully used to detect the airborne viral pathogens that cause exotic Newcastle disease and hoof-and-mouth disease, as well as strains of avian flu virus in California commercial poultry flocks.*

The SASS 2300 collects both particulates and water-soluble chemical vapors from the air. These materials are extracted from the sampled air and trapped in a small volume of liquid that can be removed at any time for analysis. Distilled water is typically the sample liquid of choice and no additives or surfactants are required for high efficiency. Trace aerosol concentrations can be amplified by extending the sampling time to hours or days.

Air is drawn in through a threaded adapter on the unit's exterior. This adapter allows the mounting of your own accessories such as flexible intake tubes, filters and nozzles. A built-in peristaltic pump can transfer liquid samples to an external analyzer for immediate analysis, or to a sample vial filling station mounted on the back of the unit. This filling station is convenient for dispensing all or a part of the liquid sample into a dropper bottle of the type used with lateral flow bioassay tickets.

The particle extraction process involves intimate mixing of incoming air with re-circulating sample water. To prevent evaporation, liquid volume is monitored with a proprietary sensor attached to the water feedback tube. When the sample water inventory falls below a preset level, a microprocessor-controlled peristaltic pump meters a small amount of clean water into the re-circulation loop from an onboard water reservoir to bring the level back to set point. Water inventories can be maintained within a range of about 4 cc to 5 cc with an accuracy of a few tenths of a cc for periods of hours to days (U.S. Patent 6,532,835). Since the re-circulation loop does not use a mechanical pump, power consumption is minimized, delicate organisms are not damaged, and cleaning is simplified.

Samples may be removed at any time using an onboard peristaltic pump. When the unit is operated manually, air flow is stopped during the sample transfer process to allow fluid films to collect as a pool in the bottom of the unit. If the unit is being operated remotely via the serial digital link, air sampling may continue during the sample transfer process. The user can in either case elect to discharge the sample to an onboard sample vial or to a discharge spigot at the rear of the instrument.

The distilled water used by the SASS for sample collection is not generally compatible with analytical procedures used to identify any captured biologicals; most require some buffer such as phosphate-buffered saline. Sample vials for the SASS are provided with a lyophilized buffer that reconstitutes when the sample is pumped in to provide a liquid ready for direct application to lateral flow immunoassays such as the DoD Hand-held Assays (HHAs) or equivalent. Please see our Application Note,“Suitability of SASS 2300 Sample Vials and SASS 3010 Sample Vials for use with Hand-Held Assays,”for description of our test procedure.

Aerosol collection characteristics are similar to those of the SASS 2000, but with significant improvements in particle retention over long collection periods. Figure 2 shows the effect of water inventory on the concentration and total number of 1 micron particles in the water phase. From this Figure it can be seen that about 5 cc of water provides optimum performance. The effect of fluid charge is modest as long as very lean, low water charges are avoided. 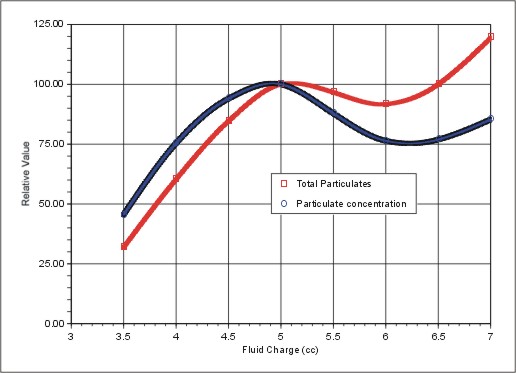 Figure 2: The effect of water inventory on the total number of particles collected and particle concentration in the water sample. Polystyrene microbeads, 1 micron diameter.

The similar SASS 2000 system has been tested at a number of facilities including Dugway Proving Grounds, Aberdeen Proving Grounds, Lawrence Livermore National Laboratory, Battelle Columbus, and the U.S. Naval Research Laboratory (NRL). A test of nine 'personal' sampler designs was conducted at Dugway Proving grounds in April 1997 against airborne Bacillus globigii in a controlled atmosphere chamber. In these tests, the number median aerodynamic spore diameter was 0.9 microns while the mass median diameter was 2.9 microns. At that time, Research International's prototype system tied with two cyclone-based devices for highest concentration factor versus time.

A second set of tests was run at BIO911 in December 1997 in which 11 different samplers were examined. In the period between the two test series, Research International made several improvements to the design that reduced water inventory and made the interior less likely to trap particles. In these tests, the SASS 2000 came in second, performing slightly lower in overall performance than the front-runner, but both it and the first-place system were substantially better than other systems tested. Its favorable performance is particularly notable since the number one system weighed four times as much and consumed 42 times more electric power.

Detailed examinations of SASS 2000 capture efficiency have been performed by Lawrence Livermore Laboratory and Battelle Columbus over the past five years. A compilation of these test results, plotted as capture efficiency versus particle size, is provided in Figure 3. Finally, in portable air sampler tests performed by Battelle Columbus in 2004, no other portable unit was found to be more efficient that the SASS 2000 series.

The SASS 2300 air sampler is microcontroller-based and can function as a stand-alone unit or connected to other sampling, detection or communication systems via RS-232 or wireless link. Purpose-designed software allows for streamlined integration with Research International's RAPTOR and BioHawk biodetectors. The extensive use of microcontroller-based circuits allows overall system operating characteristics to be easily tailored to customer requirements. Reprogramming of sampler operation may be performed at any time over the RS-232 link without having to disassemble the unit.

Users can modify to their liking how the SASS 2300 collects and processes samples using the PC-based software supplied with the system. User-defined protocols can be stored in a PC and the sampler operated from that PC or the protocols can be downloaded to the 2300’s memory. The 2300 will then follow the downloaded instruction set automatically each time it is turned on, even if not connected to a PC. 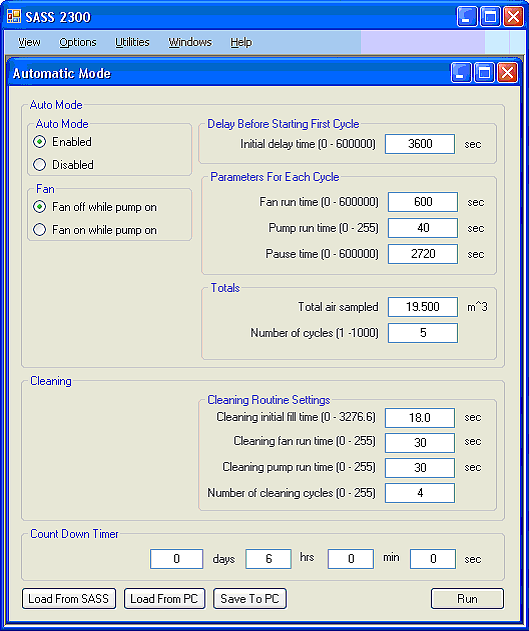 In the upper right hand corner of theAutomatic Modescreen is theDelay Before Starting First Cycletext box. A value placed in this box will cause the air sampler to pause before starting the first sampling cycle. This is useful for example if you have stirred up dust during set-up and want the dust to settle before sampling starts. Other text boxes allow you to set (1) how long the fan is on; (2) the amount of time the sample discharge pump is on; (3) the amount of pause time there is between samples; (4) and the number of sampling cycles.

TheCleaninggroup of controls shown in the bottom of Figure 4 allows the user to run an automatic cleaning protocol at the end of each fan/pump cycle. This is a procedure wherein the sampler is repeatedly flooded with excess fluid and the fan used to circulate this fluid before it is pumped out, thereby flushing contaminants collected during the previous sampling cycle. If no cleaning cycle is needed, simply enter ‘0’ in theNumber of cleaning cyclesbox.

For users who need even more control over the SASS 2300 or need to integrate it into a proprietary system, the Operating Manual provides the user with a set of over 60 ASCII commands that can be sent over the serial data link to either control or interrogate the sampler.

If the SASS 2300 is being operated remotely from a PC by wire or wireless connection, the main program window in Figure 5 continuously shows key operating parameters associated with the sampler. A large graph displays the liquid sample volume circulating in the cyclone. The vertical labels on the left side of the graph represent the raw counts from a liquid level detector inside the SASS 2300 while the vertical labels on the right side represent the corresponding milliliters of liquid circulating in the cyclone. The signal from the liquid level detector is displayed in red and normally oscillates about the set point that is represented by a blue horizontal line. 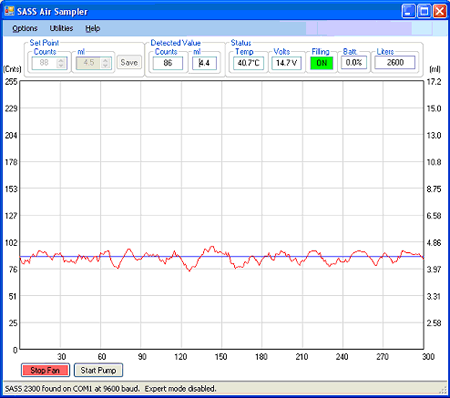 The upper left of the main window shows theSet Pointinformation. The set point is the desired operating volume for the cyclone that the microcontroller-driven electronics in the SASS 2300 maintains while the fan is running, by adding make up fluid as it evaporates or is pumped out.

To the right of theSet Pointgroup in Figure 5 is theDetected Valuegroup of controls. These controls display the reading from the internal liquid level sensor that is used to maintain the liquid volume in the cyclone. This is the value plotted by a red line on the graph.

TheStatusgroup in the upper right of Figure 5 shows several system operating parameters. The real-time internal electronics temperature is displayed in theTempfield, in degrees Celsius. The temperature sensor that generates this reading is located on the SASS 2300’s internal PC board. The operating voltage is displayed in theVoltsfield. TheFillingfield displays the status of the pump that is used to fill the cyclone with makeup fluid when the fan is running. This pump turns on momentarily for a few seconds at a time to assure that the proper liquid level is maintained in the cyclone. When this pump is off, theFillingfield will display the wordOFFwith a white background. When the pump is on it will display the wordONwith a bright green background. TheBattfield displays the percentage of battery life remaining. TheLitersfield displays the number of liters of air that have been sampled since the fan was last turned on. If you are running inAutomatic Mode(Figure 4) this field will display the cumulative liters of air sampled since these operations were started.

Research International reserves the right to change specifications without prior notice.

To request a price quote, check the box beside the desired item(s), fill out the form at the bottom of the page, and press Submit. We try to respond within two business days.